The site is secure.
A lock () or https:// ensures that you are connecting to the official website and that any information you provide is encrypted and transmitted securely.

The Gambia is a West African country surrounded by Senegal. It’s the smallest country on the mainland of Africa with a population of just over 2 million, of which up to a tenth live abroad for work. Remittances from these expatriates contribute more than 20 percent of GDP.  Tourism normally accounts for a third of the economy but the COVID-19 pandemic devastated the sector.

From 1994 to 2016, The Gambia was ruled by President Yaya Jammeh, who was regularly accused of human rights violations and limiting freedom of speech. With his defeat to Adama Barrow in the 2016 presidential elections, The Gambia experienced its first successful democratic transition of power in more than 20 years. In December of 2021, President Barrow was elected for a second term  through free and fair elections.

In the context of this important transition away from authoritarianism, USAID focuses its work in the areas of democracy, governance, the rule of law, and human rights. This support is professionalizing civil society organizations, and improving the performance of partner government institutions.

USAID increased the participation of citizens and non-governmental organizations in the design of a new constitution for the country. These included the Gambia Bar Association, several National Assembly members, and representatives of traditionally marginalized groups. In addition, USAID financed several national radio programs in local languages to engage citizens in the drafting of the constitution.

The inclusive process supported by USAID contributed to large segments of the population understanding the processes at the core of an electoral democracy, which proved important in the lead-up to the successful introduction of a new elections bill and the presidential elections of 2021.

USAID supports free and fair elections in The Gambia by assisting the country’s Independent Electoral Commission on a number of technical issues, including management of voter registration.

A free and vibrant civil society is a cornerstone of a healthy democracy. Repressed for decades under the authoritarian regime of the former president, skills and capacity building for civil society organizations in The Gambia is now a focus of USAID’s assistance. USAID activities assist groups who monitor the voter registration process, track government expenditures, and follow the way laws are passed.

In June 2021 USAID launched the 5-year Promoting Rights and Justice activity to support The Gambia as it takes steps to consolidate a democratic and accountable system of governance. The activity will provide expert advice and guidance to the Gambian justice sector so that it can serve the public by providing quality justice services.Civil society organizations will also be supported to defend citizens’ rights, promote legal reforms, and contribute to the development of a vibrant democratic culture in the country.

The Promoting Rights and Justice activity will  emphasize the rights of women, children and other vulnerable populations, ensuring that justice services and advocacy initiatives led by civil society include their perspective and specific needs.

By building Gambian institutions and public awareness of a justice system that delivers more efficient equal treatment under the law, the activity will further the development of a governance system anchored in rule-of-law principles. 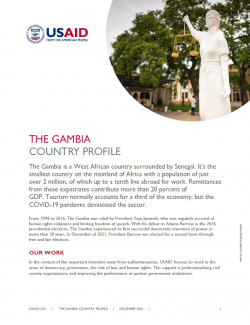